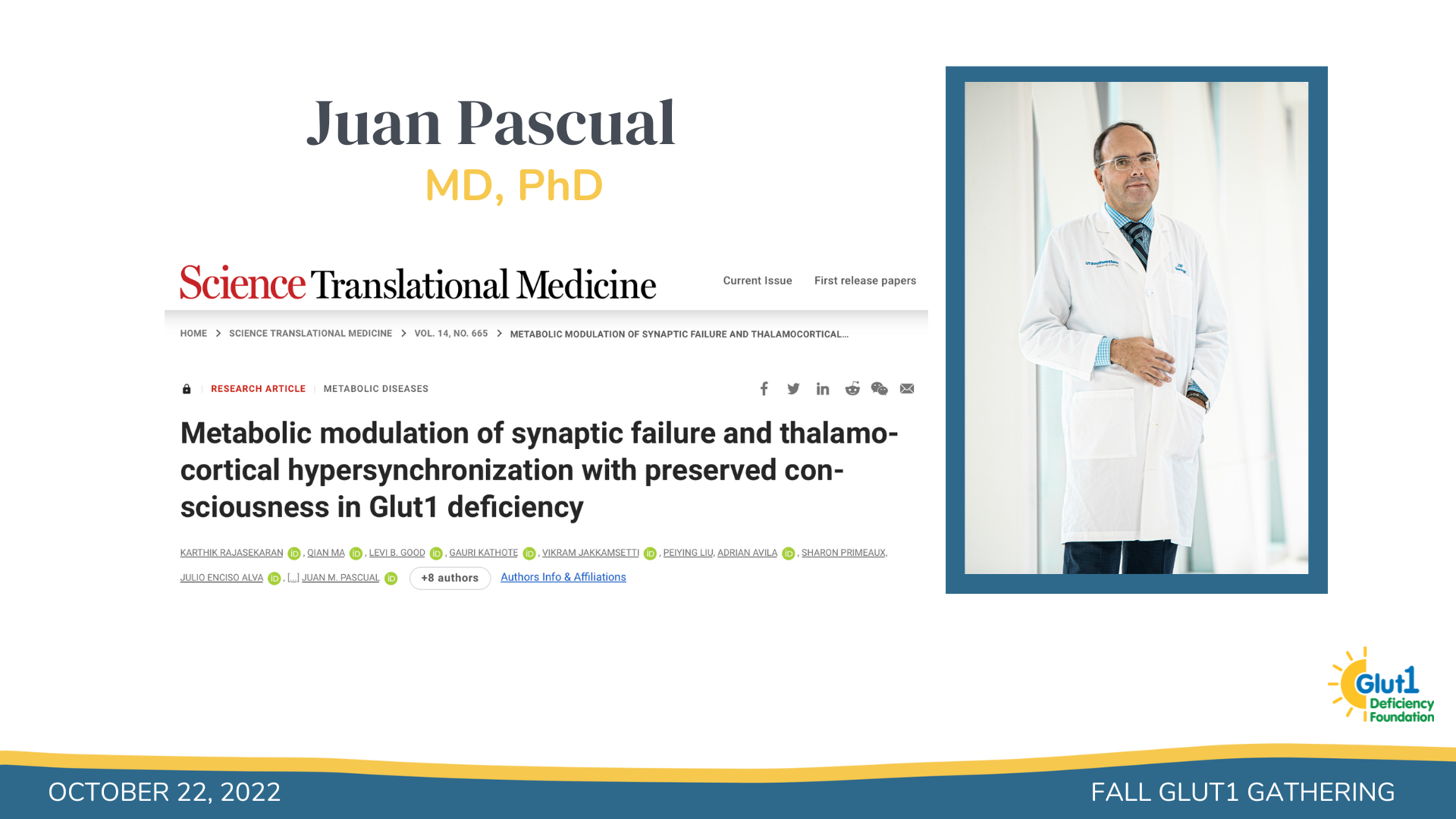 We had the privilege of being joined on Saturday, October 22nd by Dr. Juan Pascual to discuss his groundbreaking new paper:

We would like to share with you a brief summary of his presentation, as well as the Q&A session:

Some of the observations that lead to some of the studies published by Dr. Pascual and his team were that when you superimpose seizure activity in someone with Glut1 before and after a meal, the seizures are almost identical in terms of the size of the electrical discharge (the peaks and valleys) and their duration. In many people with Glut1, having a meal makes seizure frequency decrease but when they occur, they look very similar.

This suggested to them that the seizures must be coming from a very localized, tiny brain part as opposed to the whole brain. When the whole brain is involved, there are changes in frequency as the seizure progresses and different brain parts participate in that seizure event. But in Glut1, the seizures are almost identical, indicating that they are coming from a precise location – which is a key finding in this paper.

There’s a way to mathematically calculate brain activity and they were able to localize these seizures to the thalamus, somatosensory cortex and cerebellum. The cerebellum has not been found to be involved in seizure activity in neurology ever – that is a very unusual finding.

Through PET scan analysis, they have been able to see that there is decreased glucose signaling to these particular brain regions in Glut1 Deficiency which supports these findings.

In a neuron, there has to be a balance between excitation and inhibition. The inhibitory cell will suppress the activity of the excitatory cell after its function has been completed.

They found that excitation is functioning normally in Glut1 Deficiency, however, the inhibition that has to happen is low. So any excitation that occurs goes on unregulated. This leads to an imbalance where excitation is greater than inhibition.

The question then becomes how does the inhibitory cell communicate with the excitatory cell? There has to be communication (contact) between cells pre and post synaptically and what they think is happening in Glut1 Deficiency is that the excitation is functioning fine but there isn’t good communication between the excitatory and inhibitory neurons. Their observations show that the number of times at which the cells communicate with each other in Glut1 deficient mice is significantly less than in a mouse without Glut1. And if you then supplement a Glut1 mouse with high glucose, this communication normalizes.

The next question becomes, how do we observe this in a human being? We have to be able to develop a technology to determine if there is a loss of glucose transport from the blood into the brain and then downstream into metabolic processes in Glut1 Deficiency. In order to begin exploring this, they developed a methodology to look at the excitatory and inhibitory activities in a person.

They have been successful at using EEG technology to look at the excitatory and inhibitory components, separate them and measure them in a person. And most excitingly, you can also treat the person with a therapeutic agent such as C7 and be able to see the change reflected in the EEG as well without having to resort to other technologies.

The second technology is based on MRI. They give glucose intravenously that has been labeled to show up on the MRI. The label does not participate in biology in any way but makes it so that it is visible in an MRI. That allows you to be able to see glucose that went from the blood and into the brain, and how it was metabolized, which products were made from this glucose, such as Glutamate. It is important to note that it is not recognizing brain glucose that happens to be there, rather it’s glucose that went in through the blood and entered the brain otherwise you wouldn’t be able to see it on the MRI.

Other things will also appear because glucose is cycling and becoming other biochemical products as it should, and one of these products is bicarbonate. Bicarbonate is a read out of downstream biochemistry from glucose within the brain itself.

They then looked at various individuals and saw that Glut1 deficient individuals are making about 50% of the amount of bicarbonate in the brain that a healthy volunteer has. This tells you that the amount of glucose going into the brain is about 50% of what it should be according to the bicarbonate levels observed in Glut1 deficient patients. The fact that now you can observe this in a person and measure a precise number (as opposed to just high/low) to these metabolic processes is very exciting. The value is that you can not only see what Glut1 is but you can also measure the effect of a treatment. These are extremely expensive tests to run on a person and this is not something that will be done routinely, this is mostly for research but it can be done.

Were the Glut1 patients in the data on the ketogenic diet or C7 oil treatment?

The MRI and EEG data that was shown in Glut1 individuals was done with no particular diet. This is brand new technology and there are so many fundamental and important questions that we can look at now that this technology has been developed.

How would you extrapolate the components of your findings to a non-epileptic phenotype and rather more movement disorder type of events?

That’s an important question that we don’t have an answer to yet, but Dr. Pascual’s guess is that the activity will be very similar. The biochemistry will probably be the same for everybody and the differences in seizure presence may be due to differences in the excitability portion.

You have expressed for several years now that this isn’t a brain energy issue. Could you expand on your thinking?

In reality, brain energy disorders are usually lethal conditions. The brain doesn’t do well without energy and that isn’t what is being seen here with Glut1. Brain energy chemistry is working fine in Glut1 Deficiency, it is compensated by other things in the brain. It seems that in the case for Glut1, it is much more selective to particular cells (specifically in the inhibitory communication) in a very localized region rather than a brain energy issue. This is important when thinking about treatments because you want to be able to target only those particular cells. Additionally, locating the specific area in the brain has big implications for treatment development because it hasn’t happened in any gene or metabolic disorder before.

Could you expand on the implications of the reduction in bicarbonate?

When people breathe, you inhale oxygen and exhale CO2, plants do the opposite, they take CO2 and produce oxygen. That carbon (C) in CO2 comes from glucose and it directly makes bicarbonate within the brain. So 50% of bicarbonate means that there is 50% of CO2 being made and 50% of glucose that is entering the Krebs cycle. Low bicarbonate means low CO2, low CO2 means low biochemical activity. The whole biochemical process can be measured by the bicarbonate byproduct. It’s a direct unmistakable link to the whole biochemical event from beginning to end. This enables them to have a tool to quantify improvements in metabolism with potential treatments. In addition, this is a precise technique because it is based in brain biochemistry and is reproducible, results don’t vary much from day to day.

Could these reductions in bicarbonate depend on phenotype severity?

It’s only been done a few times so they don’t really know.

Could bicarbonate be used as a diagnostic tool?

Down the road, eventually yes but it’s important to keep in mind that the machinery being used to obtain this information is highly sophisticated instruments that involve an army of people to obtain these results and Dr. Pascual doesn’t foresee it being used routinely.

Would there be any value in thinking of bicarbonate as a treatment?

No because bicarbonate is downstream in the biological process- its the end product.

How can you explain the benefits patients see from a ketogenic diet if it isn’t really an energy crisis?

It is known that the ketones get into the cells very effectively and that the excitation and inhibition frequencies can normalize. The diet could be helping inhibitory cells to fire more. But as has been previously said, if supplying another form of energy were the main problem, the diet should work equally for everyone- that should fix everything for everybody and it doesn’t.

What about the downstream issues? lactate, glycogen and glycoproteins?

Dr. Pascual is working with other scientists in the field, Dr. Gentry, Dr. Sun and Dr. Freeze to try to understand the glucose biochemistry in Glut1 deficiency, how are all of those molecules being produced, and what role does this play.

What are you most excited about next to explore?

It turns out that in the mouse, you are able to isolate the circuit to a very thin piece of brain. The fact that it’s reproducible makes it very accessible to manipulation.